> Blog / You, Too, Can Go Pink for Breast Cancer Awareness

You, Too, Can Go Pink for Breast Cancer Awareness

Across the country sports teams are doing their part to promote October as Breast Cancer Awareness Month. They’re spreading the word and raising money to right this deadly disease, and they doing it style. Pink style.

Breast cancer is all too common

One in 8 women will face a breast cancer diagnosis at some point, maybe while she’s still a young adult, maybe later on in life.

And, guys, just for the record (and something to consider for your own continued good health), men can develop breast cancer, too. Men represent “only” about 1% of US breast cancer cases – around 2,000 new diagnoses each year. And about 400 deaths each year.

Susan G. Komen for the Cure® chose pink as their designated color when the organization was formed back in 1982. In 2001 professional sports teams took up the pink flag, lending their considerable voice to promoting breast cancer awareness and holding fundraisers to support research and patient support.

Pro sports teams have had a tremendous impact over the years. They have wide audiences and fans who want to emulate their favorite teams or individual players.

Your team can make an impact, too.

Encourage your players, coaches, families, fans and community to join the pink revolution, to visibly show your spirit when it comes to beating breast cancer. SquadLocker offers a plentitude of pink apparel and gear in our Breast Cancer Awareness store, and all these items are 15% off through October: 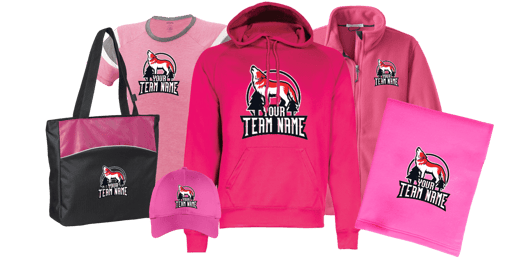 Your SquadLocker online store makes fundraising easy, all the time. So why not designate a special fundraiser for Breast Cancer Awareness this month? (You can raise even more money thanks to that 15% discount noted above!) Almost any items would be good for this, but if you need help deciding, here are our top 6 pink picks for fundraising.

Join the PINK OUT

As captain of Mt. Lebanon High’s cheerleading squad she knew something about leadership, so she persuaded authorities to say yes. That October, they went all out:

Every contribution to Breast Cancer Awareness Month makes a difference. At SquadLocker, we applaud every team that steps up, whether you wear pink to help spread the word, raise money to help fund a cure, or do both.