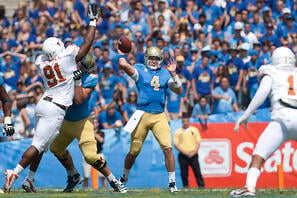 With Johnny Football's recent suspension for allegedly getting a small payment for signing autographs and last week's admission by NFL player Arian Foster of receiving payments while playing in college, the controversy and hypocrisy of paying student athletes is a very hot topic. At the center of the discussion is the notion that students are scholar athletes and the idea of incentivizing them with money for their dedication or performance will somehow violate the long standing tradition that it is simply their duty and privilege to play.

With every economic equation, every exchange of goods and services in any marketplace there is at some point, over some period of time, a balance; meaning both parties in the exchange of money for the goods and services get an equal value after the exchange is completed. In the case of NCAA sports like college football and college basketball, this is no longer the case. The basic principles of the fair and even exchange or what is also referred to as Pareto Optimal exchange is way out of whack. The reason for this lack of balance lies within the sources of value. The colleges and the NCAA are reaping massive monetary awards in exchange for allowing broadcast companies the rights to televise the game's content; additional paydays are coming from apparel and merchandise companies paying for the rights to use the likeness of the college names and their players. This exchange at the surface looks fair. NCAA organizes the events and promotes the rules and sponsorships, media companies get millions of eyeballs watching the college game content which drives massive advertising revenue, but the question remains, where is the labor cost in these exchanges and is that labor being fairly compensated?

NCAA scholar athletes receive no financial benefit from the millions if not billions of dollars generated off the backs of their hard work. Furthermore, these student athletes risk life and limb to reach these performance levels, risking so much that one bad hit, or fall could eliminate the long term viability of a professional sports career. Long term effects of repetitive physical contact have shown to cause brain damage and severe back, knee, hip and shoulder injuries directly affecting the quality of most athletes lives post graduation. While the glory of winning for your school is admirable, the cost borne by the individual athlete versus the financial benefit awarded to the school and the NCAA is no longer fair.

If a student works at the school cafeteria for 4 years an average of 20 hours a week for, say, $12.00 per hour, they would earn about $50,000 over the course of their undergraduate program. Would it be crazy or irresponsible for the school to pay a student athlete $50,000 per year in exchange for the physical risk and massive time commitment? Especially in light of the money the school's program is earning from the student's work? What company in America gets to make millions of dollars a year and not pay its employees? One could compare the working conditions of underage employees in the New England textile mills during the industrial revolution to the plight of the college athlete.

So when does the hypocrisy and exploitation end? Will the student athlete become the next pocket of untapped value for organized labor in America, rebalancing the exchange of monetary value through negotiated labor contracts, or will the NCAA and their member colleges smarten up first?