The New Tuck Rule and the NHL's Uniform Guidelines for 2014 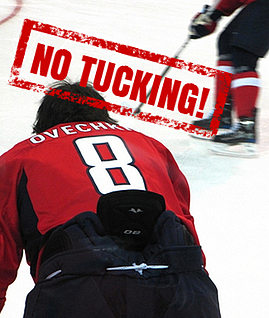 Though team sports are often held up as an example of people working together to achieve a common goal, there is a certain element of individuality that pervades even the most collective-minded games. Hockey certainly qualifies as a sport that champions team above self in its traditions, marketing, and rules. This last area has been under intense scrutiny since September when the league announced that any players wearing tucked jerseys would be penalized and no prior warnings will be given. The new rule states:

"Players are not permitted to tuck their jersey into their pants in such a manner where the top padding of the pant and/or additional body protection (affixed to the pant or affixed to the Player’s body) is exposed outside the jersey. The back uniform number must not be covered or obstructed in any fashion by protruding pads or other protective padding."

The rule has caused some controversy because of the stars that have worn tucked jerseys in the past. Many current NHL players grew up idolizing Wayne Gretzky, arguably the sport’s greatest player ever. Gretzky wore his jersey tucked in throughout his career, and current star Alex Ovechkin has followed suit. Ovechkin is not happy about the rule change, and doesn't agree that it makes the game any safer:

“I’m the guy who love [sic] that kind of stuff. I’m kind of upset about it, but [the] most important thing, nobody talk [sic] to us, the players. They think it can be dangerous for somebody. I think it’s kind of stupid.”

There are other less divisive uniform changes have come to the NHL recently, such as the rule stipulating that jersey sleeves must reach the cuff of players’ gloves. However, the new tuck rule is by far the most intriguing development and is leading fans to question the league’s motives and goals for the sport. The NHL shares the winter with the NBA and the NFL. Both leagues (particularly the NBA) go out of their way to market their stars, whereas the NHL places more of an emphasis on the collective ability of teams. Of course, part of the reason for this discrepancy is that even the best NHL players spend less than half of the game on the ice. In contrast, prominent NFL stars often play on all of their team’s offensive or defensive snaps, and the best NBA players regularly play over three-quarters of their team’s minutes.

However, it’s not as if the NHL has never marketed its star players. Washington Capitals coach Adam Oates expressed some frustration about the tuck rule taking away from the league’s marketing capabilities: “Superstars have identities, that’s why they’re superstars. It’s part of their makeup and their personality.”

It seems that many fans, coaches, and players feel that there is a place for both individuality and collectivity in the NHL. By creating a rule that takes away some of the former, the NHL risks losing the fans that value some of the sport’s most compelling personalities.