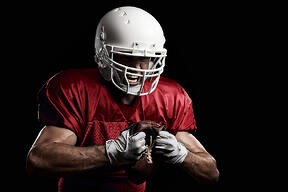 In sports, the best teams often find small advantages in aspects of the game that other squads deem irrelevant. For example, New England Patriots coach Bill Belichick focuses on the weather more than many of his peers, frequently allowing the playing conditions to dictate his strategic decisions. Though many coaches understand that the weather has a significant impact on their teams’ performance, very few actually adjust their tactics accordingly. Belichick’s tendency to alter his decisions based on the wind, precipitation, or temperature has paid off for him; his teams have traditionally played well under adverse weather conditions.

Like Belichick’s focus on playing conditions, a proper attention to your team’s uniform colors can be the difference between winning and losing. If you’re in a position to choose your youth or high school team’s uniform colors, you should choose the colors that empower your players and intimidate your opponents. This might mean choosing red, which is associated with dominance, or black, which is linked to aggression.

The Science of Color

The importance of uniform color might sound exaggerated, but there have been several studies that support the power of black and red. In 1988, Cornell University’s Mark G. Frank and Thomas Gilovich conducted a study in which 25 subjects who were not fans of the NFL or NHL rated random team uniforms from the two leagues based on characteristics related to aggressiveness. Teams with black uniforms were consistently tabbed as more aggressive than their non-black threaded counterparts. The study also analyzed penalties, a presumed indicator of aggressiveness, in the two leagues. They found that the five NFL teams who wore black between 1970 and 1986 received the most penalty yardage during that span and that four of the five NHL teams sporting black between 1970 and 1985 received the most penalty minutes during that time frame. Moreover, Frank and Gilovich concluded that athletes wearing black uniforms were more likely to start playing aggressively than other competitors.

Similar to Frank and Gilovich’s study, a study conducted by University of Durham researchers Russell Hill and Robert Barton ties red to dominance. The duo analyzed the 2004 Summer Olympics in Athens, Greece, and the 2004 Euro international soccer tournament. At the Olympics, when competitors were randomly provided with red or blue uniforms and given an equally matched foe, red teams were more likely to emerge victorious. At the Euro tournament, red teams also enjoyed similar success.

So next time you're in the market for uniforms, consider red or black as options that can give you the psychological edge.